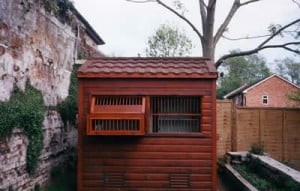 The average number of birds in a loft is around 60 pigeons.  These include a team of old birds, a team of young birds and stock pigeons used for breeding. 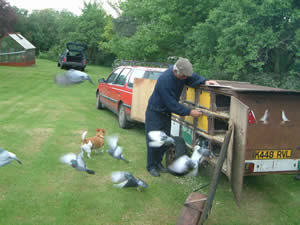 Fanciers will train their pigeons about 2 to 3 weeks before the season starts in earnest.  They are exercised everyday around the loft for a minimum of one hour but this does depend on the fancier‘s work commitments etc.  Feeding is done in the loft where their water supply also is.  The only access to water outside the loft is perhaps a bath as racing pigeons love to bathe.  Training can consist of an individual taking his pigeons 20 to 30 miles away from the loft or sometimes club members will get together to train their pigeons, perhaps in a training trailer.

The RPRA has around 2500 clubs.  Members join a club which usually has between 6 and 30 members.  Members race within a club but clubs are also members of federations when 2 or more clubs combine to make a race larger.  Usually it is the federation that provides the pigeon transporter and convoyer to release the pigeons. Some federations group together into a combine which means that the race may have several thousand pigeons entered.

Entering the race has had the same procedure for decades now.  Fanciers basket their birds at their loft and take them to the ‘marking station’.  This is usually the clubhouse.   The fancier has a race entry form which has his personal details, the ring number and sex of the birds entered into the race.  The race entry sheet is held by the club secretary for 2 years after the race.  The fancier also has to provide his vaccination form to certify that the pigeons he is racing are vaccinated against PMV.  A copy of this is held by the club.

The fancier hands over each of his pigeons individually to the marking team where the ring number is double checked against the entry form.  The pigeon is checked for good health as the team will not want to jeopardise the health of any other pigeons. A rubber band is placed on the pigeon’s leg and the pigeon is put into a pannier/crate designed to fit onto the pigeon transporter, cocks in one basket, hens in another.  Clubs do not know the total number of pigeons entered into a race until all its members have completed their entry forms.  However, a typical transporter will hold approximately 5,000 pigeons. When the basket holds the required number of pigeons the crate is sealed with a security tag.  This is to stop anyone tampering with the pigeons, by taking one out or putting one in.

The transporter travels to the liberation site through the night and parks up.  Liberation sites are designated areas that we use on a regular basis.  In consultation between the race controller/organiser back at the club and the convoyer a decision is taken on what time to release the pigeons.  This is weather dependent and we will not release into poor weather at the site or where inclement weather is reported on the line of flight back to the club region.  It is not unusual for the transporter to wait a day or two for the weather to improve.  Shortly before the due liberation the security tags on the crates are cut by the convoyer and the pigeons are then released.

When the pigeon arrives back at the owner’s loft the rubber band is taken from its leg and placed into a timing clock.  A good percentage of pigeons will arrive back at the loft on race day but sometimes they can take a day or two to work their way home.  Any strays that are reported to the RPRA are repatriated in accordance with our rules: within 48 hours from a member of the public, or 14 days if in the hands of another fancier.

On arrival back at the club the transporter is cleaned and disinfected in accordance with current legislation.

You are here: Home > About RPRA > Getting Started > A Beginner’s Guide

The largest gathering of pigeon fanciers in the United Kingdom - the BHW Show of the Year 2023 - too[...]

There are still places available for the 2023 RPRA One Loft Race, and we have a couple of ways t[...]