The school that built its own loft

Richard Chambers is a teacher and the loft manager at the Kingsmead Technology College School Pigeon Loft. Here he gives an update on developments at the school:

“We have set up a racing pigeon loft at the school to try and encourage more young people into the sport, and also to give young people at our school an alternative to the Playstations, X-Boxes and TV screens that so many of our students are dedicating their spare time to. We have found that this does have a big effect on not only their schoolwork, but also their social skills. We have come up with alternative options for the students to get them involved and to get them more active in their day-to-day life.

The project has taken over 18 months to get up and running, and has involved getting the school to agree to let us have the pigeons on site. We then had to gain the permission from the County School Authority. We had to present what we were intending to do to the two groups, and were then asked questions about the objectives that we had for the project and how we are going to fund it, as well as how the birds will be looked after and if the project would comply with Health & Safety regulations. After this was passed we then had to look for sponsorship to fund the project; we approached the RPRA and they awarded us a fund of £1000 towards getting the pigeon loft. We approached a number of Pigeon Loft Suppliers and we were offered an 18 x 8ft Loft erected and delivered for £1300 by Barnsley Lofts, who were making no profit on the loft at all. We did have the small problem of the extra £300 to fund for the loft, so we put an advert on Pigeon Chat to see if we were able to get any help. Within a few hours we had been offered the money from Pigeon Chat themselves. This was great, as we had the initial money to get the loft delivered and erected – a massive part of the project had been sorted out. We then had to look at what else was needed for the loft: we came up with a full list of things that would be needed, such as box perches and nest boxes, drinkers and wing stamps, food troughs and baskets etc – you can imagine what was on the list! Our next step was to approach companies to see if they were able to help us out; I can honestly say if I never write a letter asking for sponsorship again I will be a happy man! But on a serious note it was really worth it as we had a great response from the members of the pigeon sport, and without that support we would not have been able to run the project.

So after all of the planning we could start to get the cogs in motion. We had our building materials delivered – sponsored by J Hamplett of Ranton Building Suppliers – and we built the foundations with some help from local club men Carl Rose and Dale Chambers.

The following week we had the loft delivered from Barnsley Lofts, under the close eye of the groups doing PE that day out on the field. This news seamed to spread like wildfire around the school, and my favourite comment of the day was “Sir the school must be loaded to be able to build a cricket pavilion”! I had to laugh and say that it was not a cricket pavilion but a pigeon loft, and then continued to explain what we were setting up. After the loft had been finished we then received the box perches and German Style nest boxes that had been kindly donated from Red Star Lofts – we constructed and fitted them over the weekend.

Everything was now in place for the first arrivals and they came from Alan Bamford of Bamfords Top Flight. We received 4 pigeons – 2 Chequers from stock Alan had gained from B Denny, and 2 Blue that are Wildermersh lines. So we were off! Later that week I received an e-mail from a fancier in Runcorn, Cheshire, by the name of Joey Pickstock who flies in the partnership of Pickstock & Gillespie. He had seen an advert that we had put on Pigeon Chat asking for donations of birds and offered us 6. That weekend I went to Runcorn to pick up the birds and they where excellent; we had 2 blue, 2 blue pied and 2 chequers. One of the Blue Pieds was named Lucy by the school caretaker – she is a beauty and one of the favourites of the kids and staff. This donation took our total up to 10. We then received 3 pigeons from Formula 1 Lofts, 1 Chocolate Meuleman from Adam in Kettering, 2 from Mr & Mrs Brown of Cannock, 1 from Chambers Family in Cannock, 2 from Albert Cousins of Belfast, 2 from Anthony Williams of B Williams & Son Swansea. A big thank you to Alan Jones for delivering these pigeons to us. We have also been gifted 4 Pigeons from Mark Gilbert of Winkfield. Mark needs no explanation to what he has achieved, and it was such a great opportunity to go down to Windsor for the morning to meet Mark and his friend John.

We were given a guided tour of the loft and we were lucky enough to handle some exceptional pigeons, including his 2nd National Tarbes 2011 winner and not only his 1st international winner but also 2nd International and 3rd International from Agen / Villeneuve 2011. We also handled the pigeon he timed in from Barcelona this year, and some of the team he will be sending to Saintes in the NFC. We would like to thank Mark for his hospitality and the fantastic birds he has donated. These pigeons will go into the flight for the next week to get use to the surroundings before joining the rest of the team who are out and flying strong. We have had a few fly always but we are looking good for the drop back and hopefully get some races into the birds before the season is out. 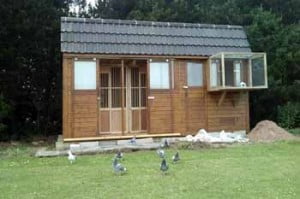 I would like to take this opportunity to thank the following people for their sponsorship, as without this help and support it would not have been possible to get as far as we have done so far. So thank you to the RPRA, Ranton Building Suppliers, Barnsley Lofts, Redstar Lofts, Bamfords Top Flight, Orego – Stim, Pigeon Chat, A Bamford, Pickstock & Gillespie, Formula 1 Lofts, Adam from Kettering, Mr & Mrs Brown – Carl Rose – Chambers Family Cannock, Albert Cousins Belfast, B Williams & Son Swansea, Mark Gilbert Winkfield, The Midlands Continental Classic Flying Club and the British Barcelona Flying Club for their free membership, and all the people who have helped us with support over the last 18 months. Keep your eyes out in the future as we will be keeping you all posted in future weeks on how the loft is getting on, together with some more pictures of the kids and the future development of the project.

Well that’s it for the time being – good luck all, and happy flying.”