Trevor Jenkin of Penzance gives us an update on the Helping Harvey Campaign, launched in aid of his great nephew who has Cerebal Palsy and was in need of an operation called a Selective Dorsal Rhizotomy to aid his mobility. 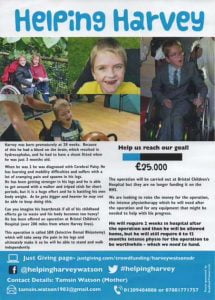 Trevor says: “The appeal was started in December 2016 to raise £25,000 so that Harvey – who was 8 years old – could have a life changing operation and all the specialised after care, which could be up to 2 years. The NHS would not fund it, and all of the money would have to be raised by the family.

“The appeal was started by Harvey’s parents. Harvey is my sister’s grandson, and as I am a pigeon fancier, I said to my wife that I am sure pigeon fanciers and firms supplying pigeon requisites would support me in trying to raise funds to support The Helping Harvey Appeal.

“I started my campaign with the help of my club mate and very good friend Mr John Angwin in December 2016. I sent out e-mails to all of the firms supplying pigeon requisites, asking for their support with either goods or vouchers that we could sell and raffle at our club room to raise funds for Harvey. The response was excellent, and a lot of these goods I collected from the firms’ stands at the BHW Show of the Year in January 2017.

“These were raffled and sold in our club room – The Penzance Premier Racing Pigeon Club – at our breeder/buyer sales, when we also presented two cheques to Harvey. At the first presentation my wife presented Harvey with a teddy bear called ‘Trevor’; Harvey was delighted and called it his ‘Uncle Trevor Bear’. He loved that little bear and he took it everywhere with him; in particular, to the Bristol Children’s Hospital when he had his operation where he said it helped him through his physio, and that it protected him and looked after him.

“My next task was about getting birds from top fanciers throughout the UK and selling them on the Elimar auction site. I saw Les Parkinson at the Blackpool Show and mentioned to him what I wanted to do to raise money for Helping Harvey. Les said to contact him when we got home and he would see what he could do. When I contacted Les he went out of his way to help me; Les, Kim, Lizzie and all of the Elimar team helped make the appeal a huge success. They provided all of their services free of charge, and every penny raised on Elimar was given to Harvey. Elimar never charged a penny , and we are all so grateful to them for helping to make our appeal so successful.

“Another gentleman who was instrumental in the success of this appeal is Mr Gareth Watkins of Wales. Gareth helped me with details of his contacts, and his advice helped secure birds from the top men in the country; many of them Gareth contacted for me. I will always be so grateful for his help and advice, helping make this appeal a huge success. We had birds donated from all of the top studs in the country, and throughout the campaign the BHW editor & staff printed all of the updates on the appeal and Harvey’s progress without charge – the family are so grateful for this very kind gesture. 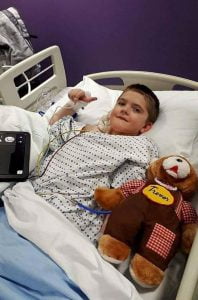 “The BICC officials and members, the NFC officials, and the BHW Charity Fund Committee all supported The Helping Harvey Appeal with large donations; such a wonderful gesture. The BICC made the Appeal their nominated charity for the year and the family thank all of the officials and members who raised a fantastic £500. On his visit to Cornwall Mr Gareth Watkins, representing the BICC, presented the cheque to Harvey at The Penzance Premier RPC Prize Presentation where he was Chief Guest.

“Here I must thank Mr Ian Evans, General Manager of the RPRA, for his help in presenting Harvey’s appeal to the committee of the BHW Show Charity Fund to help secure such a generous amount. All in all, The Helping Harvey Appeal was a huge success: the final total raised in the twelve months was £13,809 which was a truly fantastic sum. Harvey and his parents are so grateful to all of you wonderful people for your generosity and support, to enable their son to have a better life. 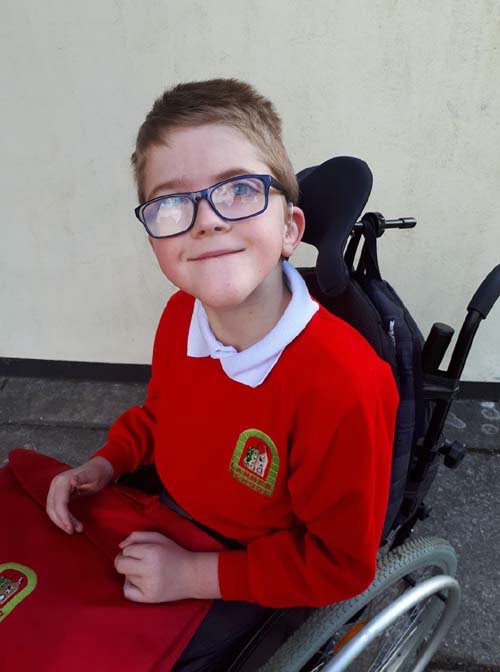 “Since the operation in April 2017, Harvey does not have to take the medication that he has been on for the last 8 years any more. He is now pain free, he is able to walk for short periods with the aid of his sticks, he is sleeping much better, his school work is improving, and a lot of his lower body functions are returning slowly: all in all a tremendous result made possible with the help of all you wonderful pigeon fanciers and firms.

“Harvey’s parents have said to me on many occasions that had it not been for the pigeon world, Harvey’s operation would not have been done so early. You can all feel so proud of your wonderful achievement to give this little boy a better quality of life.”

Click on a thumbnail below to view a slideshow of images:

You are here: Home > The Helping Harvey Campaign

See further down the page for individual case updates and the latest position. In recent news[...]

The RPRA National Awards for 2022 have now been determined. As last year, the majority were decid[...]