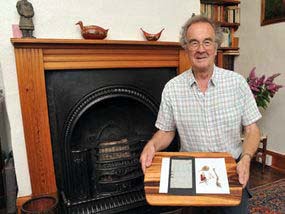 While ripping out an old fireplace at a derelict house in Surrey, David and Ann Martin found what they thought to be a discarded chicken bone, but which on closer inspection turned out to be the remains of a pigeon.

Attached to the bird’s foot was a small red cylinder, and inside they found a coded message that was almost certainly dispatched from Nazi-occupied France. The highly sensitive Pigeon Service document is now being analysed by codebreakers at the Government listening post GCHQ, and the contents of the message, which is not dated, will remain a mystery until it is fully decoded.

One Response to “The Mystery of the Missing Carrier Pigeon”